In early June 2016, I stood outside the YHA Backpackers in the National Park Village on New Zealand’s North Island staring up at the silhouettes of mountains. Over the course of the day that was just dawning, I would take part in a number of personal firsts: first hike in a group, first guided hike and first winter hike. And my first time up a mountain in this wild and impressive country.

Below is a short article about my experience, with some advice for those who would like to do the Tongariro Alpine Crossing too. Which should be most of you…

The route is well-known and well-walked. In summer, up to a thousand people a day can be found tramping, (New Zealand’s word for hiking), the 19.7km between Mangatepopo car park to the west and Ketetahi car park to the north. In winter or the ‘shoulder ‘ / off-peak seasons this number decreases, as freedom tramping, (going without guides), becomes actively discouraged as, for most of us, it would be dangerously foolish to attempt.

I hiked the mountain at the beginning of the winter season. There was barely a foot and a half of snow on the tops and over a metre was due to settle over the next month in time for the start of the ski season.

We had great weather for our hike, but still witnessed how quickly the weather can change. At our highest point of the day, we saw a weather system begin to move in minutes after it had been clear and crisp. Thankfully it passed us by, but served as warning not to ever take a hike like this lightly or flippantly.

There is a simple rule we must always follow when approaching any hike – don’t fuck with the mountains. At all times, read the advice and take it seriously – it could save your life and those who would have to come and rescue you if you underestimate the challenge. And if you do  do this hike in winter be sensible and go with a certified guide. I chose Adventure Outdoors, who were excellent and I will comment on more below.

A description of the route

Beginning in Mangatepopo car park (1100m above sea level) and heading to Ketetahi (800m) is the ‘easier’ direction. It involves a steeper climb of just over 700m and a more gradual descent of 1100m. While this might seem counter-intuitive to take on a step uphill, a steep descent can be much harder work on the body. Particularly in wintery conditions I would rather ascend steep paths than come down them.

For most of the route the path is clearly marked, with wooden boardwalks at lower elevations and steps at various points. In winter these get covered, so you have to cut your own path, (another strong reason to take a knowledgeable guide). Regardless, you will need decent footwear as the path is often rocky and at points soft with volcanic soil, notably in the craters you traverse.

The first few kilometres through the valley are relatively easy walking along a defined path which cuts through increasingly rocky landscape and climbs 250m in total. You pass small streams and the odd waterfall, such as Soda Springs which were apparently very active some years ago, spurting water out of the rock. The last toilets for some 9km are located here too, with views on a good day of Mount Taranaki in the distance.

From here you climb up the Devil’s Staircase – a sequence of well-constructed steps climbing 300m in the shadow of Mount Nguaruhoe. Taken at a steady pace these are not too difficult, and there are plenty of plateaus in between to take a breather. From here there is the option to summit Mount Nguaruhoe (2287m) which adds around 2.5 hours to the hike. Follow only the well-marked entrance to this summit – other routes up are covered in loose rock and would be dangerous to hike.

View from half-way up the Devil’s Staircase looking back on the route we had come up he valley to the right. Mount Taranaki is just visible on the left in the far distance!

This first ascent comes out at the edge of the South Crater which sits at an elevation of 1650m.  From here the landscape changes as you traverse the crater itself and head towards the second part of the ascent. We required crampons and ice axes at this point, (for grip and balance respectively), as the following climb has no steps but is rather a steady uphill up to and along the ridge-line between Nguaruhoe and Tongariro.

From the crater base you hike up the edge of the crater and look over the edge at the landscape made famous as Mordor.  Here you turn left and ascend the ridge-line to reach the plateau between Tongariro to the West, Nguaruhoe to the South and the Red Crater to the East. From here you can summit Tongariro, (1967m, allow 1.5-2 hours for this), or head up to the top of the Red Crater ridge-line in front of you, (1886m, 5 minutes from the plateau), for views of the volcanic lakes below, (variously blue, green and red), and Lake Taupo in the distance to the North.

This marked our high point and was where we stopped for lunch, some 3 and a half hours after starting. This time reflects a relatively slow pace for a fit hiker, but was well-chosen by our guides, making the ascent accessible to the range of physical fitness displayed in a group of this size. The top had stunning 360degree views over the red earth, black rock and white snow – thanks to the ten minute window of clear skies between chilling cloud cover.

Looking north from our high point, with Lake Taupo visible in the distance and the gap we’d traverse on our descent in the centre.

Our descent began through the middle of the Central Crater to the West of the ridge-line, heading between Tongariro and the volcanic lakes to the East. After a steep start to the descent (the steepest section we faced), we took our crampons off in the flat base of the crater. In summer, a normal path would follow the ridge-line down toward the Emerald Lakes and along the edge of the Blue Lake (1725m), bypassing this crater entirely. In winter the path by the lakes is too steep to be safe, so we were one of the first groups to ‘cut’ this new path.

We continued through a clear gap between Tongariro and the Blue Lake over rocky ground which undulates at first with a few uphills for good measure. Nothing too challenging though. There are clear marker posts through this section, which come in handy as the path is not prepared as it is at lower ground and one could easily walk off in the wrong direction without them.

Coming out the other side, we met expansive views to the North of Lake Taupo and, a little further along, the small volcano Mount Te Maari. Still smoking, this was the volcano responsible for the most recent eruptions in 2012. These eruptions threw debris, (rocks up to three tonnes in weight), a significant distance.

A couple of these rocks landed through the roof the Ketetahi Hut (1456m) where our path now headed, destroying the sleeping quarters. This hut is now being preserved as evidence for future study of the eruption and so is no longer somewhere where you can stay, though it is a good point to pause for a break on the descent.

View as we came over the top of the crater, with the most recently active volcano visibly steaming on the right.

From the hut there is a steady 7km walk down to the carpark, through increasingly dense bush. It is a gradual and easy descent of 656m through changing landscape as rocks become bushes become trees become rainforest.

Towards the end of this you pass through a 700m stretch that is declared a Lahar zone. In 2012, and during subsequent heavy rainfalls, the banks of the Blue Lake burst sending torrents of water and rock down the mountainside destroying all in its path. The path it took is clearly visible as a brown strip in the bottom left of the final picture below.

Around 4pm, 8 hours after leaving the guide company’s bus, we piled back in to be transported back to our accommodations. Our guides told us that our time was on the good side of the normal time, but some groups can take up 2hours longer or separate much more on the descent. In truth, the walk feels doable in 6 and half or seven hours, and I imagine in summer this would be a time to allow. 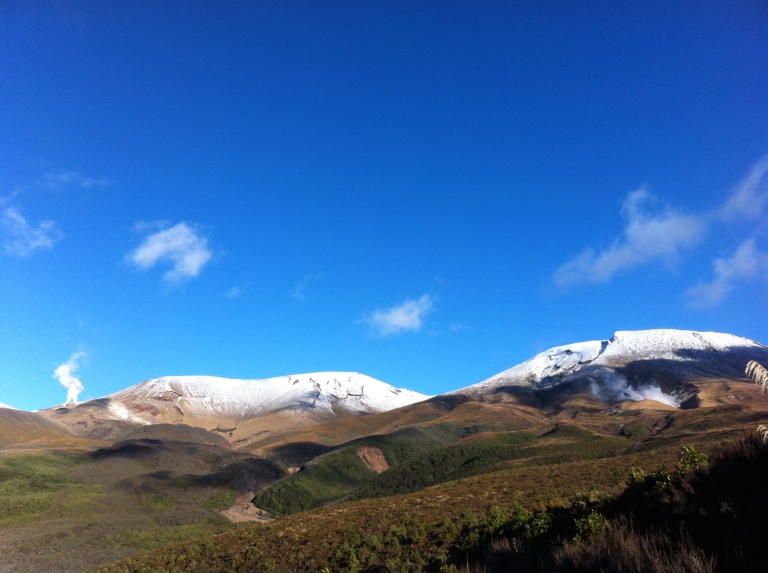 An image from the end of the route, with volcanoes steaming on the left and right and the gap we traversed in the centre.

Adventure Outdoors provided expert and compassionate guiding, equipped everyone with all the kit needed and were generous in their conversation and knowledge of the area. It cost me NZ$185 and they were worth every dollar. I would recommend Sarah-Cate and her team of excellent guides to anyone, though there are three or four other companies offering a range of packages. Thanks to our guides Sarah, Tom and Pete for getting us up and down safe and sound.

I felt hugely privileged to do this hike on a beautiful early winter’s day. By the end of the day I knew I had been on a good hike, though at no point did the ascent or descent feel overly challenging or out of my comfort zone. As such, I’d say that anyone with some experience of hiking will find the hike enjoyable but not overly physically challenging day hike. For those with no experience it is still absolutely doable, but do go with a guide who’ll help pace the hike appropriately.

One day I hope to find myself hiking back through this beaut of a route.