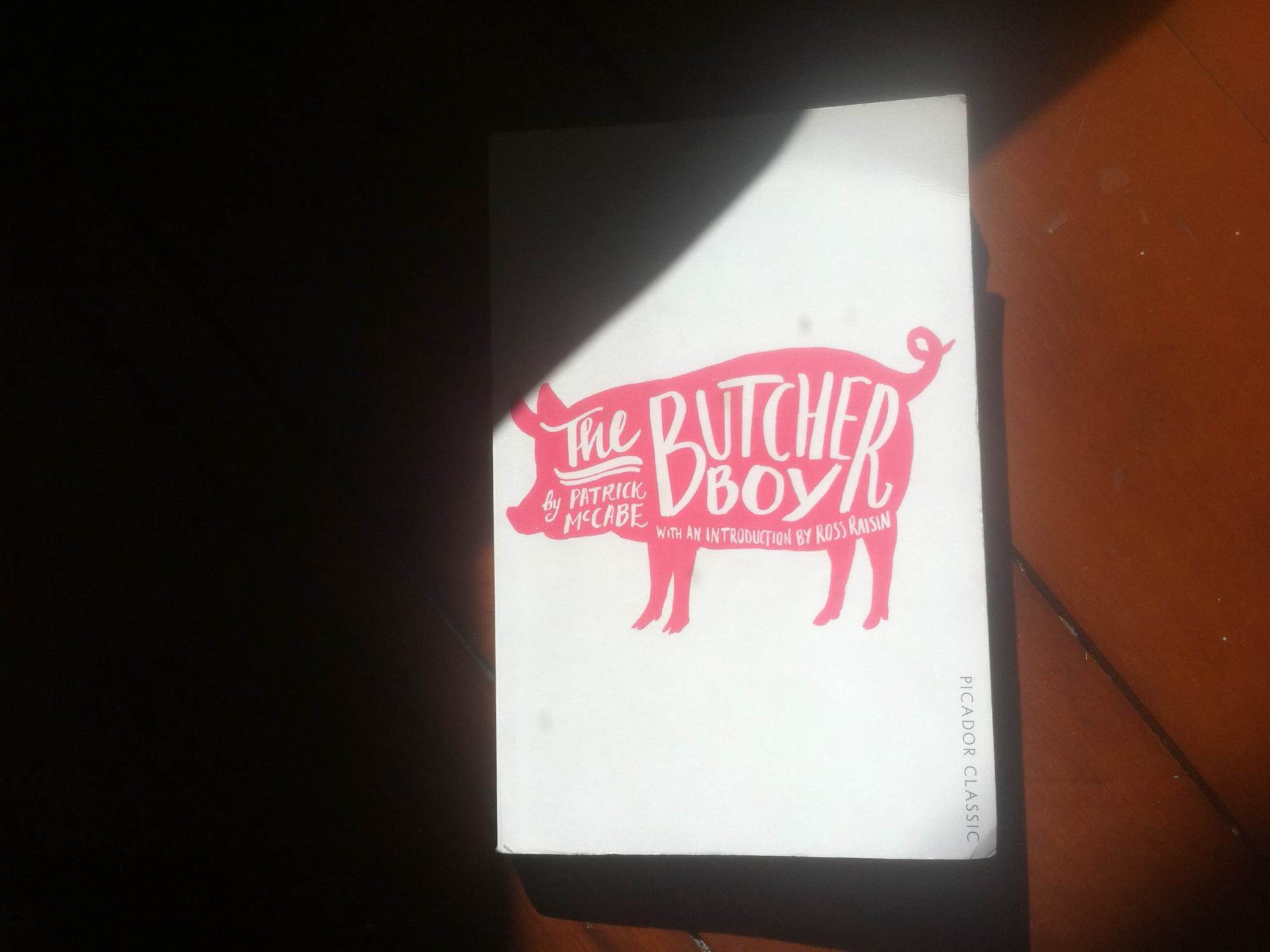 Patrick McCabe’s 1992 classic of Irish literature is at once a highly entertaining tale and a tragic exploration of mental illness, set against a backdrop of a rural Ireland seemingly trapped in its own past.

“…there was nothing only the rain sweeping over the town and the fires glowing in the sitting rooms and the smell of frying and the grey jumpy rays of television screens behind the curtains.”

The book centres around a character called Francie—or Francis—Brady. He is the only child of a troubled couple and grows up with a friend called Joe.

Caught in a number of looping obsessions, he fails to move forward with the rest of the world, leading us to witness a tragic spiral with all-too-predictable ends.

He talks with unending verve throughout the book and leaves us guessing whether he knows where the line is between reality and his imagination. We are carried through the twists and turns of the story by the masterful and addictive song of his language, as if we were reading it on auto-pilot.

A triumph of a text

The Butcher Boy is an extraordinary literary exercise. Told through Francie’s own captivating voice, the story bounces erratically through his mind with barely a comma’s pause to slow the troubled narrator down or keep him straight.

From the first page, we discover his light-hearted and ‘look on the brightside’ kind of attitude that begins normally enough. Anything negative is flipped and delivered with a jovial quip.

“I stuck my nose out to see what was going on. Plink – rain if you don’t mind. But I wasn’t complaining. I liked rain. The hiss of the water and the earth so soft bright green plants would nearly sprout beside you. This is the life I said.”

But it is a viewpoint that becomes increasingly distorted by traumas, the consumption of alcohol and drugs and his inability to move beyond his childhood wishes.

As the town grows up around him, Francie seems caught in a cruel stasis, continuing to see the world through the innocent eyes of a young child.

Meanwhile, his actions take on all the seriousness of adulthood.

Reading between the lines

Frames of reference for the truth of each scene’s reality are offered through the snatches of dialogue Francie has with other characters.

There is often an internal voice commenting on these exchanges in which Francie tells us what he’d like to have said or imagining what is going on in the other person’s mind.

And in the comments of others, we also discover the subtle signs of Francie’s shift from loveable rapscallion to dangerous threat.

“I said to him have you any fags no he says I do not sell cigarettes we are closing now please.

I must have asked him for fags again. He says: I told you! Cigarettes, I do not sell them! Now please! He opened the door. One fag then, I says, I’ll give you a tanner. Please! He says.”

McCabe captures the rural Irish dialect in a way that is as comic and spontaneous as it is extremely formalised, almost rehearsed. Just as in Eimear McBride’s 2013 debut A Girl is a Half-formed Thing I found I reading this book in an Irish accent helped me to fully immerse in it.

“Joe said there was some crack in the town and there sure was. Hand me down the spanner I think Mrs Brady’s ankle needs tightening. Oh now, I said, what a laugh.”

Reading the 2015 edition—which features an excellent introduction by Ross Raisin and a recent afterword from the author—I found various themes confronted that find a strong cultural resonance in the recent history of the Emerald Isle.

Each is dealt with masterfully as McCabe creates a dynamic tension created between the jovial language and the difficult themes. Moments of trauma are diffused with pedestrian thoughts, flights of Francie’s imagination or jokes.

“…you’ll clean up that before you leave here with the police and the walls too for my wife’s not going to do it. You’ve put her through enough. Well, that Mr Nugent, I thought. How was I supposed to run a proper pig farm with these kinds of interruptions? Mm? That’s what I wanted to know I said. But not to Mr Nooge himself. What I said to him was: Tell me Mr Nugent how’s Buttsy getting along?”

While a device to deepen this character, I feel this was also a way that McCabe pointed out an inherent cultural resistance to discuss difficult topics openly. It is hard not to read this in an accusatory tone directed, perhaps, at the Irish culture of the 20th Century.

A deft treatment of brutal subjects

What is so wonderful about this book is that McCabe touches on these difficult subjects in such a way that they pass into a kind of tragic backdrop for the larger tragedy of Francie’s own downward spiral.

Nothing is ever really dwelt upon, except Francie’s own looping childhood motifs (goldfish, John Wayne, the snowdrop, oranges and Joe).

Each trauma exists as a matter-of-fact element of a life that rolls on, no matter what. Their costs are revealed behind the lines though and, as the book progresses, we feel a pressure building as Francie becomes increasingly focussed on what was rather than what is.

“When we were in there me and Joe used to think: Nothing can ever go wrong. But it wasn’t like that anymore.”

A classic of the modern Irish canon

Whether as a precursor to Eimear McBride’s book, what is impressive about McCabe’s writing is the way he challenges and distorts the language’s syntax to make it authentic to the Irish dialect and mindset of Francie Brady.

While McBride used short and sporadic sentences to suggest a mind jumping between thoughts, McCabe’s sentences are stuffed with U-turns and sudden swerves that suggest a mind as unstable as a roller coaster. Both books require concentration, but I found The Butcher Boy a little simpler as Francie’s voice is almost addictively compelling.

I could easily imagine him weaving tales in the corner of an Irish bar somewhere if his fate were not to descend to the spiralled climax of this book.

“O he’s coming along grand he said even though nobody asked him. All da was worried about was he’d be caught red handed with the whiskey and get kicked out into the laurel bushes and told never to come back. Up at seven every morning saying Mass, never gives back answers, O he’s a credit Mr Brady.”

Another element McCabe uses brilliantly is the repetition of phrases and beliefs, almost as if they were involuntary ticks. They weave the book together in such a way that Francie appears to be held in a kind of cruel stasis while also careering forwards at a frightening rate.

There are even moments when the other characters point out these looping motifs to Francie.

“Your man with the scarf and the tassels says: You told us all about that before. Quit telling us the same story!”

It is an uncomfortable tension and one that grows as you turn the pages.

You might say that we know what’s coming from the first pages, but our route and the literary ride that takes us there is one we may be tempted to take a good few times.

But do I believe that Francie recognises his own decline?

Yes, I think he does. Peeking through the playfulness of his growing madness we find thoughts with a disarming clarity, though they often arrive in unexpected ways.

“There was a half-ghost sitting there who had only one thing to say: All the beautiful things of this world are lies. They count for nothing in the end.”

Patrick McCabe’s book is a masterful handling of regional dialect, cultural baggage and the dark issues that laced the working classes of mid-20th Century Ireland.

How he made such themes entertaining is a mark of the author’s achievement, but truly entertaining this book is and well worth reading.

One thought on “Book Review: The Butcher Boy”